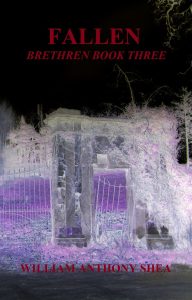 The Brethren cannot continue if a mortal society is to be free to find its way. James has long realised this to be true but the vampire hierarchy are resistant to change. They will not willingly surrender control to a living world. All the pieces are falling in place as James enlists Helena’s aid in countering a Brethren dominance over mortal and immortal societies. Kara Reiss too has a part to play. The gamble is as daring as it is mad, but the time of reckoning is fast approaching.

Helena has her own distractions to contend with when a nightmare offers revelations that shake the very foundation of all that she believes. She looks to James to help her make sense of an impossible truth.

The hierarchy is not yet done as those who seek to counter James in his ambitions move against him. The game that is being played is not the one the Brethren think, but who will fall and who will endure in the long night…

BUY IT NOW ON AMAZON!